Casio hasn’t been a serious player in the world of synthesizers for some time. Gone are the days of the beloved CZ series, while the current lineup lacks the lo-fi charm of classic keyboards like the SK-1 and VL-1. But for the last few weeks the company has been teasing what seemed like a return to real-deal synths, possibly with a vocoder.

Well, bad news: The CT-S1000V is not a return to Casio’s analog glory days. Nor is it a vocoder. And the $450 list price is a little hard to swallow.

So what exactly is the CT-S1000V? It looks like a midrange Casiotone that uses the company’s flagship AiX engine, with vocal synthesis tossed in as a bonus. In short, it’s a singing keyboard. Frankly, the novelty of being able to whip up some lyrics in the companion app, send them to the CT-S1000V, and then play the words as a melody was more than enough to pique my interest. I’m a sucker for vocoders, over-the-top autotune and talkboxes, so a singing synth is right up my alley.

Before we dig too far into the vocal synthesis side of things, let’s quickly cover the AiX engine and the hardware. AiX made its debut in 2018 and its strength supposedly lies in recreating acoustic sounds. And look, credit where credit is due: The piano sounds on this are pretty decent. Can I say the same about the other acoustic instruments represented here, like violins, guitars or trumpets? No. But there are enough quality sounds, including some recreations of classic Casio synth tones, to keep you entertained for a while.

Don’t come to the S1000V expecting a truly customizable synth, though. While there are some tweaks that you can make, this is not the keyboard for someone looking to learn synthesis or get into sound design. That should be immediately obvious, however, when you look at its front panel. The controls are minimal. Physically it has much more in common with the $250 CT-S400 than it does with the $480 CT-X5000 (the closest Casio has to a traditional synth).

I haven’t played a modern Casio in some time, but I do have to say, the speaker system is impressive. Because the CT-S1000V is clearly aimed at budding pianists and home entertainment, being self-contained is a huge plus. While the built-in speakers on other keyboards often seem like an afterthought, Casio clearly put effort into them here. When you switch over to the drum and rhythm presets, it’s really quite shocking how much bass you get from the kicks.

On the whole, the CT-S1000V feels well built. It’s plasticky and the full-sized keys are a tad springy, but it feels solid and the click wheel that serves as your primary tool for navigating the interface is satisfying. Casio did make some strange decisions, though. For instance, the mod knob above the pitch wheel. Mod wheels and mod strips? Sure. But a mod knob? In this configuration, where the placement would suggest it’s a performance tool, seems very odd.

The keyboard also comes with a Bluetooth adapter in the box, but it can only be used for streaming audio and MIDI data. It can’t connect to the companion Lyric Creator app. There are no dedicated MIDI ports on the back and, while it can supposedly be used for MIDI over USB I was unable to get it to work. There are, however, two pedal inputs on the back (one of which can be used for expression), plus ¼-inch stereo audio outs and ⅛-inch jacks for audio in and headphones. There’s also a pair of USB ports: one USB-A specifically for the Bluetooth adapter and a micro-USB (sigh) connector for transferring lyrics from the app on your phone.

The app is very well designed and thorough, and lyric transfers over USB using a camera kit adapter with my aging iPhone X were almost instantaneous. Casio says transfer over Bluetooth isn’t supported because it would simply be too slow, but just having it as an option would be nice.

In the app you can either type out or dictate phrases and it will do its best to automatically parse the text. Your mileage may vary, though. Computers aren’t always the best at reproducing human pronunciation and the CT-S1000V is no different. For example, “Engadget” was automatically broken down as “en-gadget”. But when the keyboard sang it back, it became “engage.” I had to go in and manually tweak the lyric to be “En-gad-jet” for it to sound right.

You can really dive deep and customize the phonemes if you want, and punch in specific timings using standard music notation. But there’s no avoiding the fact that getting lyrics to sound right requires a lot of trial and error, which would be less of an issue if you could preview the rendered vocals on your phone before transferring them to the keyboard. Right now it’s just a lot of back and forth.

On the keyboard itself, you have two primary ways of playing back lyrics: Either in Phrase mode or in Note mode as individual syllables. The former will play back the words using the timing you programmed in. As long as you’re holding keys down, it will sing the lyrics to you. The one issue here is that playback will start over from the beginning if you ever let go of the keys. With syllable playback you have more control over timing and it’s a bit easier to knock out a melody (at least for someone like me who can’t really play piano). But it’s still important that your syllables be broken down just right or the timing will be off when you try to play back a vocal lick.

There are 22 different voices for you to pick between that range from synthetic choirs, to demonic growls, to talkbox emulations. Some of them get pretty same-sounding, but the variety is welcome. There are a few ways to tweak the voices, including changing the “age” and “gender”, though they dramatically alter the core tone of each. 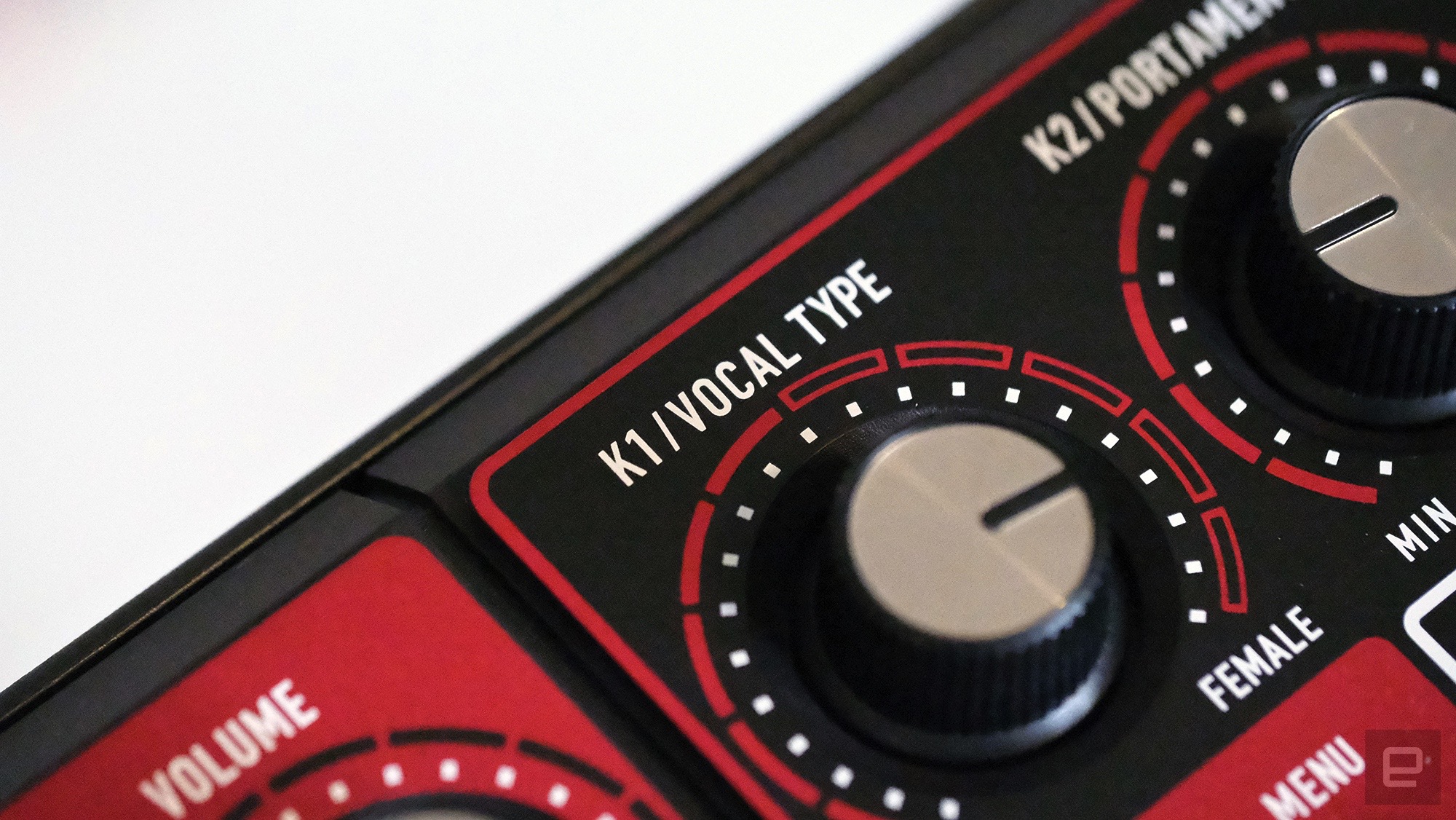 One last feature worth mentioning is the S1000V’s sampling capabilities. There are two different sampling modes: melody and drum. The latter lets you assign samples to individual keys to create custom drum kits. It’s also probably the easiest of the sampling methods to use. Melody, on the other hand, lets you play back a single sample chromatically across the keyboard by slowing it down or speeding it up. This latter trick is a fun and simple way to create custom instruments, and it’s part of what gave Casio’s SK series its charm.

But it’s worth noting that the sampling process here is slightly more cumbersome than on those old-school instruments. There’s no dedicated sampling controls on the front, you have to do a little menu diving. And there’s no built-in microphone for quick and dirty recording, you need to use the ⅛-inch jack around back, or a Bluetooth connection. It’s a nice tool to have, but I do wish it were featured more prominently and the interface a little less obtuse.

Casio deserves credit for doing something somewhat unique in building a singing keyboard. Sure, it’s a bit gimmicky to type out (or dictate) your favorite song and then play it back using a synthesized choir. But it’s undeniably fun. And including the ability to record custom samples, and layer them with the keyboard’s built-in sounds is a welcome feature.

It’s hard to overlook the $450 price, though, especially considering the limited sound design controls. The CT-S1000V is probably best suited for someone learning to play piano who wants a fun keyboard with a bit of versatility to practice on. But its price is a bit steep for what feels like mid-range Casiotone. You can get a more capable sampler for around the same price, and Arturia’s MicroFreak delivers limited vocal synthesis and a real vocoder for less. Obviously, the Casio has advantages over those — quality built-in speakers, expansive full-sized keyboard — but you’ll have to decide how much those features are worth in terms of tradeoffs and price.