After multiple delays, Square Enix’s next big game is almost here. Forspoken is the first title to come from the development team that made Final Fantasy XV – a game that came out in 2016. I spent over five hours working my way through several of the early game chapters, exploring the mystical land of Athia as Frey, attached to a sassy British-accented bangle that talks into her brain. Almost immediately they have to fight off mutated monsters and zombies and figure out how to get back home – probably saving this world on the way.

While we know the magical attacks in Forspoken are spectacular, my one-on-one battle with Sila, the Tanta of Strength, made the biggest impression during my preview session – and the best showcase for all the attacks and moves you’ll be able to master.

What are the Tantas? They are a handful of sorceresses that rule the medieval, but shattered, land of Athia. Yes, be prepared for a barrage of lore and encyclopedic entries on the history, flora and fauna of Athia – but at least I could look up everything in the menu if I ever got lost. The protagonist Frey comes with emotional baggage, some misdemeanors and a mysterious origin story of being abandoned at a train station – something that I’m sure will be revisited later in the game. She’s just as new to this world as you, but she still loves dropping the f-bomb and assorted swear words at every opportunity. I’m not a prude, it just feels excessive and immature. Hopefully, this angst tempers as the game progresses.

The world of Forspoken is a mixture of natural beauty, paranormal detritus and towns, buildings and structures from when the world hadn’t been turned upside down by what Frey calls the Break. And you can see why: It’s a huge, broken world, with glowing crystal formations jutting out of cliffs and hills. Animals and people have been transformed into fearsome beasts and zombies. Your first interaction with the locals (after hiding from a dragon), is some sort of dog-bear… thing with teeth from top to bottom. This confrontation leads to you discovering some magical gifts from Cuff – a mysterious bangle that tags along for your adventure (and is almost definitely critical to the story).

There’s a connection between the aforementioned Tanta, a war, and whatever went wrong with, you know, with the entire world. And probably a good reason why a portal opened to our Earth when Frey got her hands on that magical bangle.

Cuff isn’t only around for the (often shoehorned) narrative exposition. It offers a degree of defense (your health bar comes from the bangle, not Frey herself), but also imbues the character with an array of plant- and earth-based magical spells. These translate to support (plant) and attack (earth).

I enjoyed mixing them up. Attack spells are the showstoppers: cinematic elemental attacks that are usually ranged. There’s a skill tree to unlock upgraded spells, as well as more attack options. Some of the earth spells can deal consistent damage, like magical machine guns, while others will deal charged-up burst damage, or even create an earthen shield that will counter some physical attacks. Each one seems to have a use case.

When you’re facing a particularly tough foe, effective use of your spells will build up a special surge magic meter. Once that’s full, you can unleash a devastating attack that can hit (and hopefully kill) multiple enemies.

While some support skills are set-and-forget, like a flower ‘turret’, others require a bit more strategy. You can hit an enemy with a slow-burn seed attack to gradually seep their strength, which is useful on slower, high-defense enemies. A leech attack will lash out in a wide arc, returning health depending on how much damage it does. If you use it against multiple enemies, you’ll get more in return. These all come with a cooldown compared to the attack skills, so you’ll have to use them all strategically. (My timing and skill definitely improved as I played the game.)

Forspoken will even grade your battles, like Devil May Cry or Bayonetta. At the start of my preview demo, with limited skill (and options) I struggled to get beyond C-rank fights but in moments near the end of my demo, I’d somehow claim ‘star’ rankings – the top grade. These ranks take into account how long fights took, the amount of damage taken, damage dished out and the creative range of attacks used. You’ll get bonus points for a surprise attack, among other things. If I just gunned enemies down from afar, it was not going to get a good grade. Skilled play is rewarded by bigger loot payouts and even an experience point boost, making leveling up (and upgrading) even quicker.

As you might expect from an action RPG, there are all kinds of ways to strengthen Frey. Beyond leveling up and expanding the spell repertoire, there are equipment slots for both a necklace accessory and cloak. These can both be upgraded once you find the right resources and also customized with boons to improve health, defense and attack. I was able to even automate healing with one accessory I found during my playthrough. I could also customize Frey’s nails to beef up certain spell families, helping magic to recharge faster or simply deal more damage.

Around the same time as Frey learns she can hurl boulders and summon vines, she’s also gifted with magical parkour skills, which are a mix of parkour, wall climbing and ice skating. This really helps get across the vast landscape at a fair clip – it’s like having a horse without, well, having a horse. Forspoken tries to make the most of the PS5’s DualSense, too – Sony has a two-year exclusive with Luminous Productions’ first game. As I magically skated and jumped around, the controller subtly vibrated; when Cuff had a quip about my battle skill (or lack of), they spoke out of the DualSense speaker. The most satisfying part was the force feedback on the triggers as I charged up spells, especially if they were the big, explosive ones.

These traversal skills are sewn into the fights, too. While dodging can be a little too forgiving – Frey will sometimes arc and leap off air to avoid attacks ad infinitum– combining magical dodges and dashes with earth spells and vine attacks will amp up the power of some of Frey’s moves. Timing, however, is crucial.

The battle system did throw up some difficulty spikes. At one point, before facing off with the aforementioned sorceress Sila, I found myself being repeatedly humbled (and killed) by a herd of demon goats. Was I under-leveled? Possibly. Did I lack accessories and equipment upgrades? Definitely. But it was a choke point where the fights seemed suddenly harder than everything that came before it (including a few boss fights). In fact, it was harder for me than the eventual showdown with the Tanta of Strength, Sila.

The lock-on system seemed a little temperamental (often an issue when it’s assigned to the L3 or R3 stick buttons), and while many attacks can affect multiple enemies at once, the system leans toward one-on-one fighting – otherwise a lot of target-switching. This was still an early build of the game, however. There’s time for this to be finessed – something that’s also true of a few graphical glitches, like invisible spell effects and missing objects during a few cutscenes. 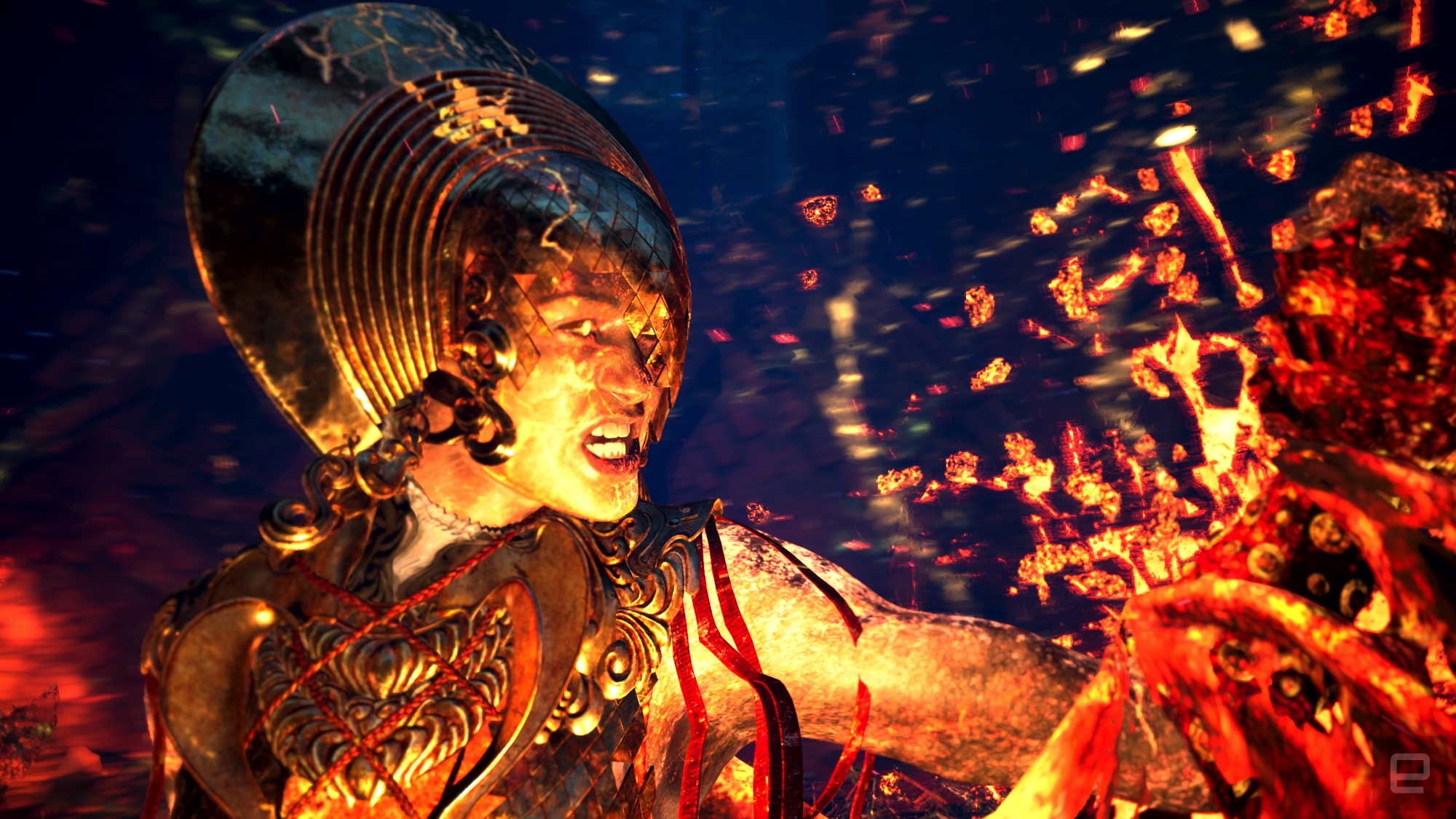 While groups were often an issue, the controls come together well in the bigger battles. Once I’d made it to the throne of the fire, sword and fiery sword-wielding Sila, I had to swap around my spells and keep my distance. Sila could soak up plenty of damage and was incredibly lethal up close. Once Frey was able to whittle down her health enough, she was joined by a platoon of her soldiers (ugh, a group battle) and went through another two ‘levels’ of fury. Without giving everything away, eventually, Frey’s left in a fiery battleground, trying to dodge molten floors and sword attacks while flinging her own earth spells and trying to restrain the raging boss with vine sorcery. It felt like the right balance of skill and cinematic magical warfare – and fun. Sila comes across as an off-kilter monster, making it easy to want to beat her.

Eventually, I prevailed and received the fire-based spells of Sila for myself, creating an entirely new skill tree of spells and charms centered around strength (buffs) and, of course, fire. If Frey is going to pick up several more skill trees from the other three Tantas, knowingly referenced in wall paintings ahead of that confrontation, that’s going to mean a lot of spells and a lot of upgrades. While I didn’t get a chance to mix up my new fire spells with earth at this demo, I wonder if there might be too many. There’s a reason Square Enix has uploaded extensive videos on Forspoken’s magic system, even if it whets the appetite with huge lightning strikes and giant explosive orbs of water. But how will all these tricks interplay? Do we really need so many spells? We’ll have to wait to see — and you can now test out a few of Frey’s tricks yourself in the free demo, available now.