Hear me out: The modular Framework Chromebook is worth the $1,000 (for some)

In a world where most laptops are entirely sealed, with no real way to tweak the hardware, Framework’s modular devices stand out. The company’s first Windows laptop was a solid computer considering the price – and that’s before you factor in the fact that you could swap ports, easily add more storage or RAM or even upgrade the processor down the line.

It’s been a little over a year since the first Framework laptops launched, and now the company has a new model, the Framework Laptop Chromebook Edition (which I’ll refer to as the Framework Chromebook from here on out). It offers the same benefits as its Windows sibling – namely, solid industrial design and specs coupled with the promise of customization and future expandability. That said, it’s also one of the more expensive Chromebooks available, starting at $999. That’s a lot of money for a Chromebook – but if it can last you five years or more, it might be worth the cost.

Visually, the Framework Chromebook has little to distinguish it. That’s not necessarily a bad thing, but it is very utilitarian, with a silver aluminum chassis that resembles so many other devices out there. Still, it’s a pretty compact device, less than two-thirds of an inch thick and weighing under three pounds. A classy reflective Framework logo on the lid is the only thing distinguishing it from an Acer, ASUS and other brands’ laptops.

A day or two later, I discovered that the Framework Chromebook does have one bit of flair: the black bezel around the screen is magnetic and easily removable. Framework actually provided me with a fun orange option, which I left on. You can also get a silver bezel if you want, but orange is a personal favorite. I’m hoping the company adds a few more colors in the future as well.

Inside that bezel is a 1080p webcam that’s totally fine for video calling. Also of interest is the fact that there are hardware switches for disabling the camera and microphones. This isn’t just a software trick either; the switches actually cut the power to those modules, making it a fairly secure option (though a physical cover over the camera would be pretty impenetrable, too).

While Framework devices are upgradeable, a few things are more permanent – namely, the display and keyboard. (You can replace both if they break, but there aren’t more advanced versions to upgrade your laptop with at this time. That could change, of course). Fortunately, both are excellent, as you’d hope for in a laptop at this price. The 13.5-inch display has a high resolution of 2,256 x 1,504, which translates to  a taller 3:2 aspect ratio that I wish were more common.

The main downside is that it’s not a touchscreen, something you’ll find on most Chromebooks. That makes installing touch-driven Android apps less appealing, though at this point most of the apps I use (Lightroom, Todoist, Spotify and video apps like Netflix) work fine with a keyboard and mouse. That minor disappointment aside, the screen is great. Text and images are sharp, and its 400-nit max brightness is more than sufficient unless you have sunlight coming through and shining right on the display.

As you’d expect, Framework swapped out the Windows keyboard layout for one that will feel familiar to Chromebook users, with the “everything” button on the left in place of caps lock and the function row shortcuts like back, refresh and screenshot right where I expected. There’s no Google Assistant key, but you can easily access the Assistant in the ChromeOS search bar if you’re so inclined. The keyboard itself is excellent; the backlit buttons have 1.5mm of travel and are solid and precise. The key caps are a bit small, but it didn’t take me long to adjust. I do wish that Framework included the fingerprint sensor found on its Windows laptop, though. Given that plenty of other Chromebooks support fingerprint unlocking, I’m surprised it isn’t available here.

At $999, the Framework Chromebook isn’t cheap, but the company didn’t spare any expense with the processor. It features Intel’s 12th-generation Core i5-1240P CPU, along with 8GB of RAM and 256GB of storage on the base model. Most Chromebooks with comparable specs are similarly priced, so Framework’s laptop isn’t excessively expensive – but the question, as always, is whether spending that much money on a ChromeOS device is a good idea at all. 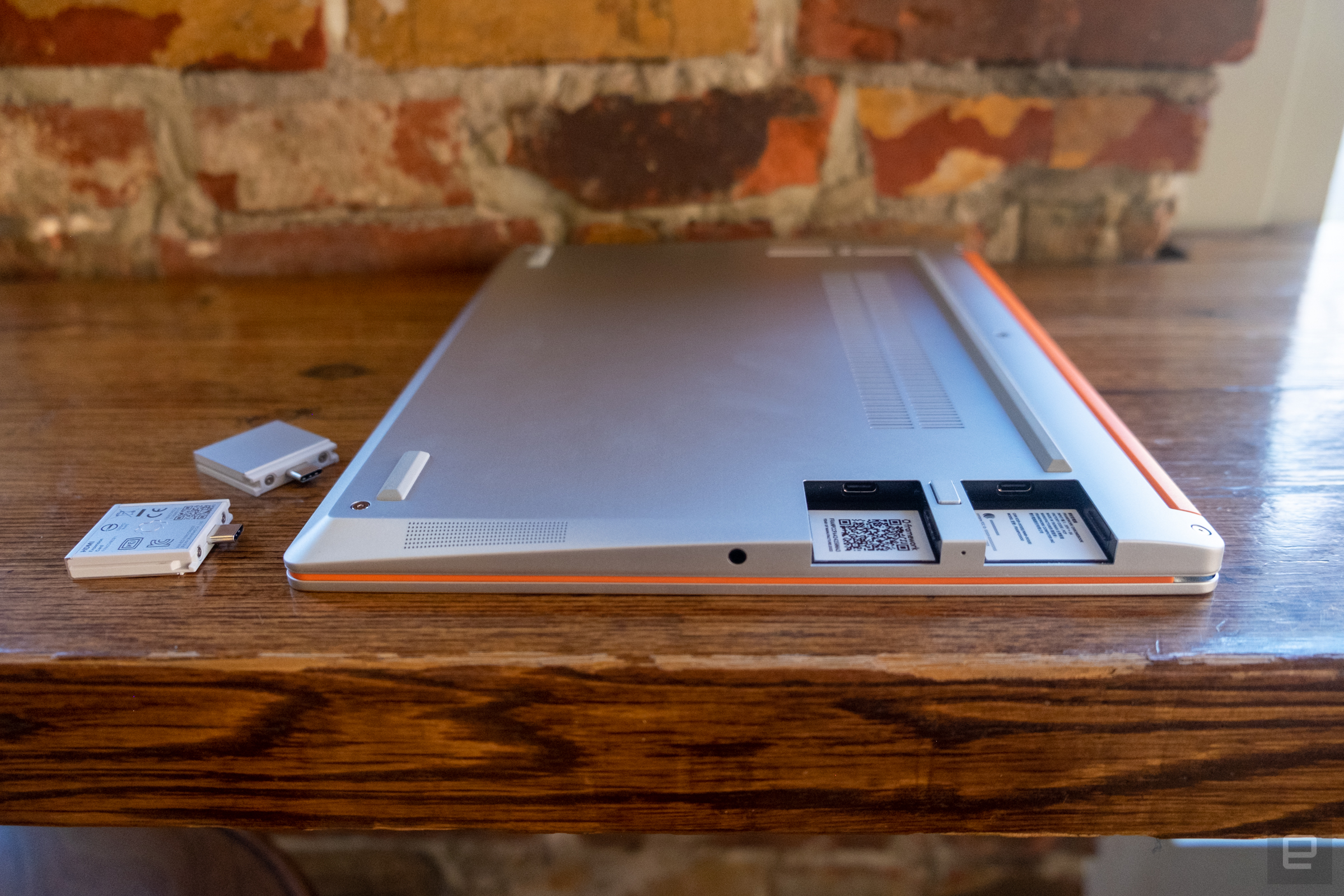 Let’s get into what makes the Framework Chromebook unique. Instead of having a set of unchangeable ports, there are four slots for user-selectable Expansion Cards. Framework offers sockets for USB-C, USB-A, HDMI, DisplayPort, Ethernet and microSD. Additionally, you can use those connections for easily-swappable storage; Framework offers 250GB and 1TB modules. All the Expansion Cards are USB-C based; the ports on the laptop itself are just four recessed USB-C openings. This means you could use the storage cards with other computers to easily move files around.

I went with two USB-C ports (one on each side), USB-A and HDMI. Framework helpfully included an LED light on each side of the laptop so you confirm when you’re charging and when the battery is full. Everything functioned as I would have expected: the HDMI port worked just fine with my external monitor, and my old USB-A flash drive showed up with no issues. I also tested out the Ethernet Expansion Card, which was plug-and-play simple (though it’s bigger than the other cards and thus sticks out of the side of the machine).

I’m of two minds when it comes to these modules. On the one hand, the ability to customize what ports are available on your computer is pretty damn cool. If I used microSD or Ethernet more, for example, I’d love the ability to swap those in, or just load up on USB-C ports if I had a lot of compatible peripherals. But there are also plenty of Chromebooks that have USB-A, HDMI and microSD slots, which makes the Framework’s modular slots a little less compelling to me.

However, the fact that my needs are modest doesn’t change the fact that there are probably lots of people who want more flexibility in their laptop. Being able to drop an Ethernet port in for when you’re doing a lot of downloading and then swap it for USB-A if you’re hooking up older accessories is undeniably useful. It also future-proofs this laptop quite a bit. If you get rid of all your USB-A gadgets, for example, just throw in another UBC-C port or add more storage. There are tons of possibilities here that you just don’t get from a standard laptop. 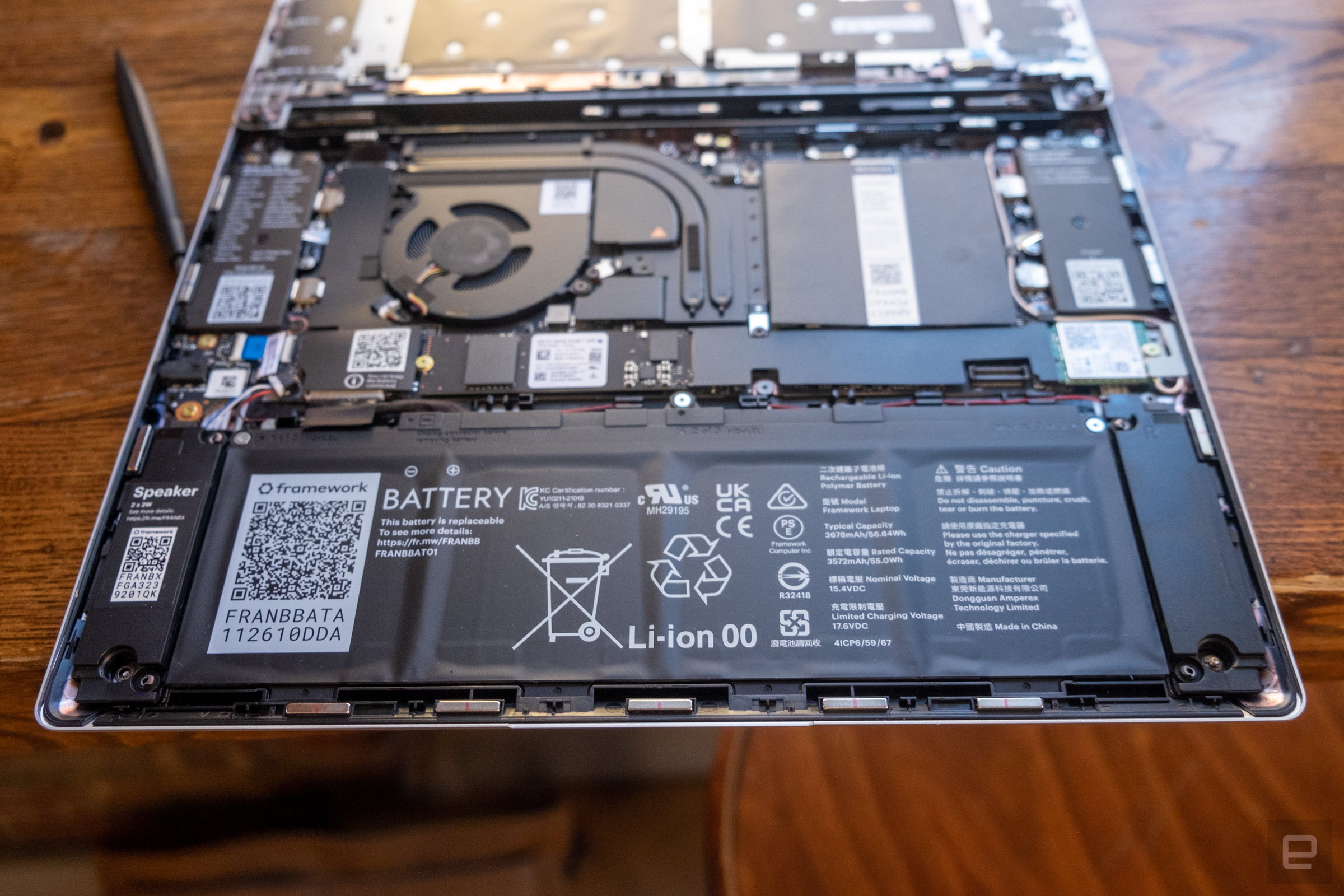 These swappable ports are only one facet of the Framework Chromebook’s flexibility. Using the included Torx T5 screwdriver, I was able to loosen the five screws on the underside of the laptop and then lift the keyboard deck right off, exposing the laptop’s innards. It’s all laid out clearly and everything is labeled, and there are QR codes you can scan to go directly to upgrade guides. I didn’t change much under the hood, but Framework provided me with a second 8GB memory chip that I was able to install in about five minutes. I can’t remember the last time I’ve been able to upgrade my laptop’s RAM like this, and with two slots I could shove in up to 64GB of memory. That’s something that will make this Chromebook a useful machine for a long time.

And that’s to say nothing about upgrading the processor. The Framework Chromebook has Intel’s latest-gen chip on board, so there’s no need to change it now. But, Framework has already started offering new “mainboards” for its Windows laptop, which originally shipped with an 11th-generation Intel CPU. It seems likely that in a few years, when Intel has newer chips available, Framework will let you swap them in and give your old laptop a nice performance bump.

Another cool point about the swappable mainboard is the fact that if you decide ChromeOS isn’t for you, you could pick up a Windows-compatible mainboard and move on with your life running Microsoft’s OS. Framework says that the Chromebook has some ChromeOS-specific parts and firmware, which is why you can’t just wipe the device and install Windows. But being able to swap the mainboard and keyboard for Windows-compatible is another example of the customization at the heart of Framework.

As you’d expect, using the Framework Chromebook was basically identical to any other Chromebook with these specs. It’s a snappy, responsive laptop that can handle basically anything you might want to do in ChromeOS, including those aforementioned Android apps as well as web apps and a ton of Chrome tabs.

Battery life is the main downside here. I only got a little over six hours unplugged doing my normal work routine, and the battery lasted about eight hours and 15 minutes when looping playback of an HD video stored locally on the laptop. Framework did note there’s a battery-draining bug when using the laptop with either the HDMI or DisplayPort expansion cards installed; that should be fixed in a future software update. But even without those cards installed, I still got the same six or so hours of battery life.

After my time with this Chromebook, I”m officially a fan of what Framework is doing. The laptop has few compromises compared to most other ChromeOS devices, namely battery life and a rather pedestrian appearance. But don’t mistake the lack of flash for poor design. The Framework Chromebook is extremely repairable for ordinary humans while still keeping a relatively small and light frame. And it also has a great screen and keyboard to go along with its powerful, upgradeable internals.

At $999, it’s one of the more expensive Chromebooks on the market, and you could get a comparable device like the Asus Chromebook Spin 714 for the comparatively low cost of $729. But, that device isn’t repairable or upgradeable at all, while the Framework Chromebook can easily be fixed by most people who buy one – and owners can also add more storage, RAM and hopefully even replace the processor down the line to keep it alive for a lot longer than your average laptop. For some people, especially those who feel like our gadgets shouldn’t be disposable things we replace every few years, that makes the Framework Chromebook worth the premium.