How McLaren is preparing for Formula E’s Gen3 debut

McLaren may be about to embark on its inaugural Formula E season next month, but the legendary racing outfit didn’t have to start from scratch. The company took over Mercedes-EQ operations at the end of last season, bringing an experienced crew along to develop its first papaya-hued EV street racers. Part of that crew was team principal Ian James, who’s now also managing director for McLaren Electric Racing as a whole. As the team prepares for the debut of Formula E’s Gen3 car in Mexico City, we sat down with James as well as drivers Jake Hughes and René Rast for a status update on development and the challenges ahead for Season 9.

“What’s really helped is that the team that’s been together over the past two or three seasons has largely stayed intact,” James said. “So that experience that we built up, we’re carrying forward into Gen3.” James further explained that he hopes that level of continuity will be key to achieving the goals McLaren has set for Season 9. Due to the limited testing opportunities ahead of the first race, the team may need to rely heavily on that experience.

Teams are only permitted to conduct a handful of on-track testing sessions before the first race of the season in mid-January. Because McLaren is a customer team – they’re running Nissan powertrains instead of building their own – they don’t get “the privilege of doing all the test days that the regulations of the championship dictate,” driver Jake Hughes explained.

Before the official preseason test this week in Valencia (six sessions across three days), Hughes and teammate René Rast have only had one proper test day, a shakedown at Bicester Heritage near McLaren HQ and a few low-power runs for media and staff. Formula E did add an additional shakedown session ahead of the official test dates this week and the championship designated a Wednesday time slot for a mock race that will include qualifying and a test of the new ABB rapid chargers. The Race reports that Formula E is also considering adding another session on Thursday on what was originally scheduled as a day off.

“We haven’t actually had a lot of on-track running,” Hughes continued. “The simulator has been the bulk of our work.” He argued that the lack of track time won’t make things more difficult for him to prepare for Gen3, even as a Formula E rookie. “It’s going to be challenging no matter what – Formula E is such a difficult championship,” Hughes said. “I’m fully aware of the challenges I have ahead of me and I will do absolutely the best I have with what I have underneath me.”

Hughes arrived in Formula E with experience in both F3 and F2, the junior series that develop talent for Formula 1. Those cars are obviously a lot different, both from a design and a powertrain standpoint. Hughes explained that the “dirty air” aspect of those feeder series and the difficulty with overtaking aren’t part of Formula E. In most races, the races run in a train, nose to tail, and you can pass when you want – so long as you’re willing to spend the extra energy to do so. So for the McLaren rookie, even though he has experience as a Formula E reserve driver, a key challenge is developing new race strategies.

“Strategy is involved in every racing series around the world, but in Formula E, it’s really critical,” he said. “Every decision you make has a huge knock-on effect with how you use your energy later on in the race.” 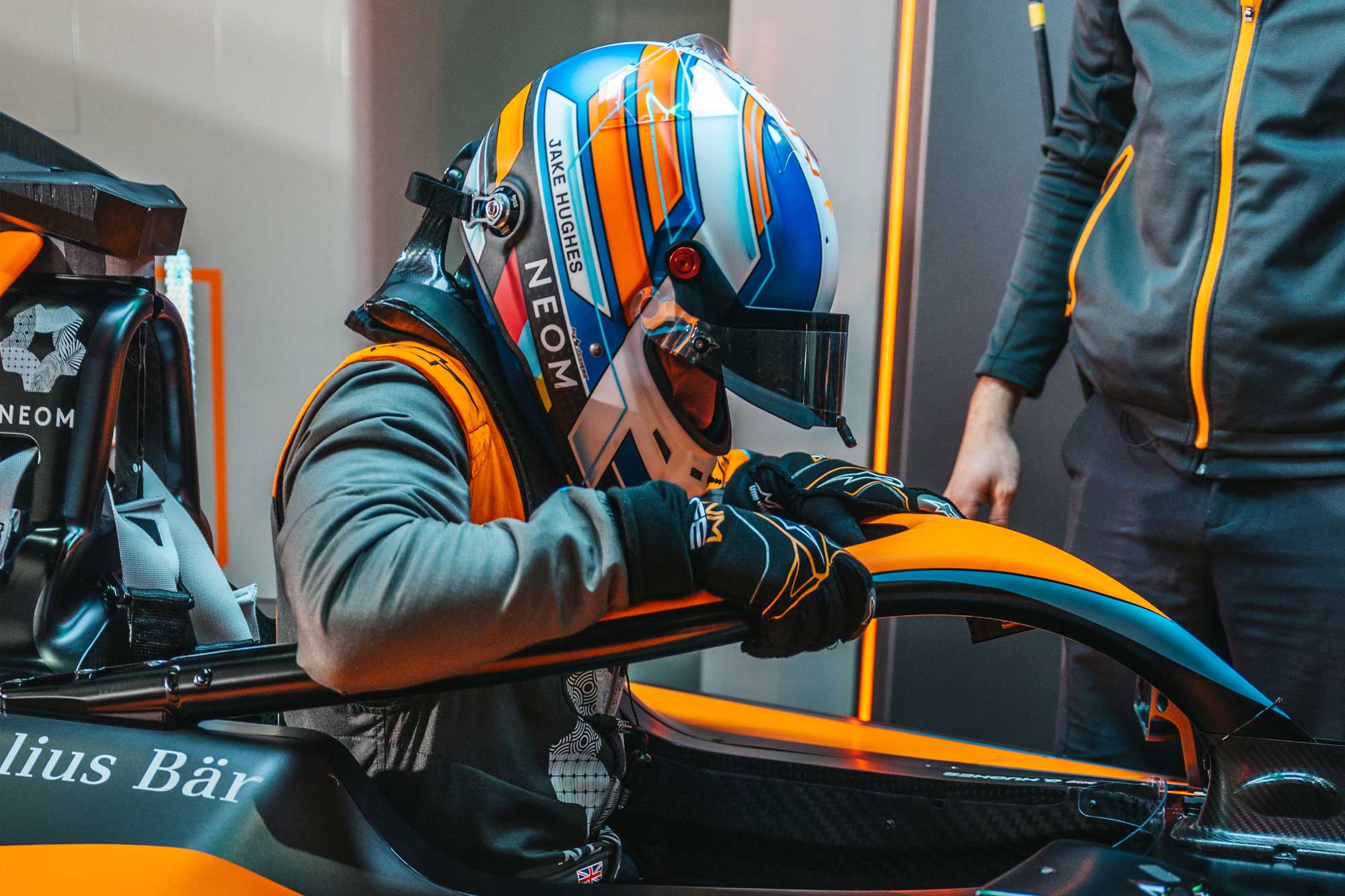 Rast explained the McLaren duo had probably spent 10 days in the simulator through the end of November with more planned ahead of the Valencia test. “That’s the only thing we can more or less do to prepare ourselves for the car because the testing is very limited and the simulator is the closest you can get,” he said. Simulated running isn’t just for the drivers though, engineers and other parts of the team are also included in those sessions. That will continue throughout the season as simulator work happens before and after every race.

The team is well aware that they’re likely facing “a very steep learning curve” when they arrive at the first E-Prix of Season 9 in Mexico City next month, according to James’ assessment. “I think it’s the teams that deal with that in the most efficient manner are the ones that will come out on top,” he continued. James specifically mentioned the new front powertrain and added regenerative abilities that will change energy management strategies, even for experienced members of the McLaren team. Aside from the updates that a more powerful Gen3 car brings, James said alterations to the race format will “throw a few curveballs in there as well.”

Formula E announced changes to the races last month, getting rid of Fan Boost and replacing Attack Mode with Attack Charge at some races. The new battery technology inside the Gen3 cars allows for quick charging, but while Formula E had planned to bring back pit stops for that purpose, the infrastructure needed to do so isn’t quite race-ready. And on top of the series having to switch things up pretty late in the game, the teams still aren’t entirely sure how the new race format will work, which partially explains the mock race.

“Obviously, Attack Mode is still the key ingredient for the race.” Rast said. “But the rest we’re going to see once the season starts.”

James explained that the teams were able to give input on the Gen3 sporting regulations as they were developed by the FIA (Formula E’s governing body). He foresees more excitement in Season 9 due to the increased flexibility in strategy the new format and guidelines will allow. So, in spite of the current unknowns, McLaren’s team principal is optimistic that “the racing this year will be closer than ever.”

“That’s going to make the racing even more exciting,” he continued. “It’s going to be more of a challenge for the engineers, working together with the drivers to make sure that we plan in the right way before the race, but then also to react to changes and the various different situations that can arise.”

And then there are the tires. Formula E is switching from a treaded Michelin tire to a custom-made compound from Hankook for Gen3. Both the old and new tires are designed to be run in both dry and wet conditions, though the Michelin compound would wear down so much on some circuits that it would basically be slick by the end of the race. Hughes explained that the Hankook version “behaves very differently,” and should be more durable.

Still, the prospect and challenge of Formula E is as much of a thrill for the drivers as ever. With Gen3, the series has moved from having to change cars during a race to complete the distance to one that will stop for a 30-second charge. It can also hit 200MPH with a 350kW motor and is capable of regenerating 40 percent of its energy. It’s the ability to show off the potential of EVs to people around the world that excites Rast.

“It’s amazingly quick, it’s a proper race car,” he explained. “We try to bring motorsport into the cities to make people aware of what’s actually possible with electrification.”

Hughes agreed, noting that the potential for carryover from technology from Formula E cars to electric road cars is something he’s happy to be part of. “We can basically help develop the future for electric mobility,” he said. “A lot of the stuff we’re developing for Gen3 I wouldn’t be surprised if you see it on road cars within the decade. What we’re doing will have a knock-on effect that even right now we’re not fully aware of.”

Despite the chaos of the offseason prep and limited testing, the work McLaren has put in appears to be heading in the right direction. Hughes was second fastest across both sessions on the first day of testing in Valencia, less than a tenth of a second behind Masterati’s Maximilian Guenther.