Every year I try to have a little “holiday gaming café” gathering at my apartment, where I invite friends over to play board and card games. While last year’s party was understandably cancelled, this year I invited a small group over and we indulged in tabletop titles like We’re Doomed and Parks. Inevitably we reached the point in the evening where people’s attention started to stray so it seemed like a good idea to switch to party video games. But instead of the old standby Jackbox, I remembered that Oink Games had just released a board game collection and decided to give that a spin.

We discovered that Let’s Play! Oink Games was not like Jackbox Party Packs at all, as it did not work with phones and required separate copies of the game on separate consoles. Pass. So we turned off the Switch, hooked up my laptop and started up Jackbox Party Pack 8 instead.

If you live in a friendless cave and aren’t familiar with Jackbox, it’s a pretty great series: Each “Party Pack” has five party games that anyone can join in with their phone (or any web browser) by going to Jackbox.tv and inputting the special room code. The narrator explains how to play and walks the group through each round — which makes it pretty great for those guests who aren’t paying attention or are super, super drunk. Most of the games involve drawing, trivia or writing silly words. (My particular favorite is ‘Mad Verse City’ from Jackbox Party Pack 5, a rap game.)

After everyone left, I decided to give Let’s Play! Oink Games another try. And, while it isn’t an alternative to Jackbox (it’s more like Clubhouse Games, if anything), it is still a somewhat fun experience, though not worth the $22 I spent.

There are only four games included with the set: Startups, Deep Sea Adventure, A Fake Artist Goes to New York, and‘Moon Adventure. They’re all computerized versions of Oink’s tabletop games, which come in little card-deck-sized boxes and usually cost $20 each. In that respect, the video game version does seem like a good deal. You have a choice to play online with either people you know or strangers, offline with people you know, or offline with CPU opponents.

Offline with friends wasn’t happening since, as I pointed out earlier, you all need your own copy of the game and a console. I tried to find an online match, only to discover there weren’t any going on. So my only choice was offline with CPU opponents.

Unfortunately, A Fake Artist Goes to New York can’t be played with CPU opponents, as it’s a drawing game where all the players but one are given a prompt, and you have to figure out who the “fake” artist is. I also discovered that Moon Adventure can have multiple players, but the user is tasked with playing them all since it’s a cooperative game. So it’s really a battle with resource management as you attempt to gather supplies before your oxygen runs out. I found this one the toughest of all, even after looking at the helpful instructions and videos the game builds in. For all my qualms with the title, the instructions are really well-done. 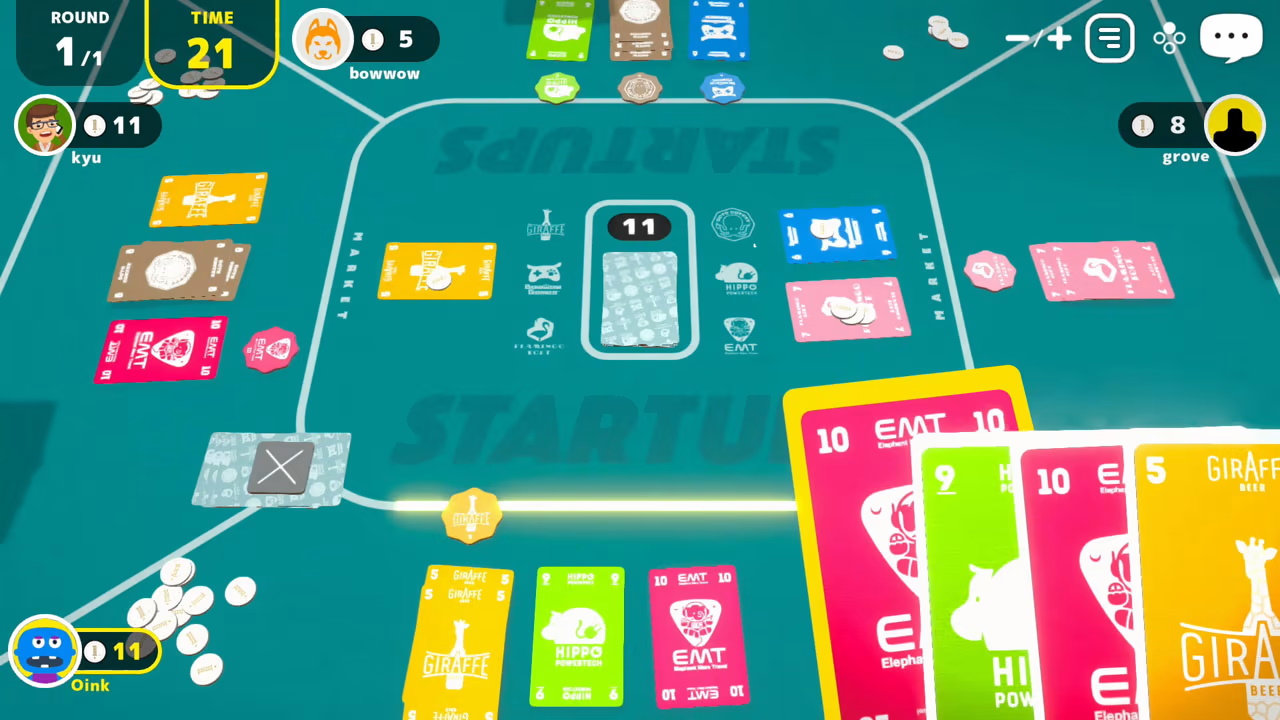 However, the instructions didn’t get me any closer to winning Startups, one of the two games where CPU players can participate. And man, are they merciless. The idea is to gather as many “shares” in a company as possible, but if you don’t have the most you end up having to pay out to the person who does. It’s like a modern version of Monopoly where you land on Boardwalk all the time. At least this one plays a lot quicker.

The last game, Deep Sea Adventure, is my favorite. It’s sort of competitive and sort of cooperative, as all the players must share the same oxygen supply and diving too deep will deplete it quickly. Once I got into the rhythm of gathering treasure and running back to the sub as soon as possible I mastered the game and was regularly kicking CPU butt.

While it was perhaps unfair of me to expect Let’s Play: Oink Games to be a Jackbox replacement, there’s still a lot of room for growth in what they have. I’d like to see a mode where users who don’t own the game can play on their own systems with a person who does, similar to how Mario Kart used to work on the DS. And I do hope they add more games, if only because this is an easier way to learn how to play instead of trying to puzzle out badly translated print instructions from Japanese, which is what you deal with in the physical versions.