Earlier this year 1010music released the Lemondrop and Fireball, two surprisingly full-featured synths in unbelievably tiny packages. The company’s Nanobox lineup covers a lot of ground between those two instruments, but neither was particularly well suited to handling drums. So the company took the same core hardware, put a percussion-focused FM engine in it, along with a sampler, gave the whole thing a playful pink paint job, and dubbed it the Razzmatazz.

The latest member of the 1010music family is a rich sounding drum machine with a simple 64-step sequencer. While it may lack some modern amenities you’d expect from a $399 instrument, it makes up for it with a robust set of sound design features. And yes, even 10 months later, the Nanoboxes are still shockingly small.

I won’t spend too much time rehashing the hardware since I’ve already covered it in my review of the Lemondrop and Fireball, but here’s a quick recap. The whole thing is 3.75 inches wide, 3 inches tall, and 1.5 inches thick – small enough to fit in even the tiniest of bags or a large pocket. There’s a two-inch touchscreen on the front, plus four navigation buttons and a pair of encoders. Around back you get ⅛-inch MIDI in and outs, ⅛-inch audio ins and outs, a USB-C port for power and a microSD slot (pre-populated with a 32GB card) for storing samples and presets.

The only notable exterior change from the previous Nanobox entries is the color. There’s no functional advantage to the Razzmatazz being hot pink, but I love it. As I mentioned in my review of Cre8Audio’s East Beast and West Pest, synths should be fun. I have nothing against the Korgs, Elektrons and Moogs of the world. But their instruments often take themselves quite seriously. And I, for one, think the synth world could use a splash of color now and then.

At the core of the Razzmatazz is an eight-voice engine that combines FM synthesis and sample playback. Each pad can be either or both, which is fairly unique. I can’t think of another affordable hardware drum machine that allows you to combine FM tones and samples in quite the same way. You can simply layer the two, but you could also, for example, use a sample of an actual timpani for the attack, then let the synth fade in after.

It’s a really fun effect and similar to what you find Roland’s late ‘80s Linear Arithmetic synthesizers like the D-50. The only issue is that figuring out how to achieve it isn’t immediately obvious. Since the two envelopes here are simple sustain / decay affairs, you can’t just soften the attack and be done with it. Instead you have to assign the envelope to control the volume of the digital oscillators, but set the mod depth to negative 100 percent, at which point the decay acts like the attack.

Another key difference is, the Razzmatazz can’t be played chromatically. So you can’t craft a room shaking bassline to accompany your drum pattern. You also can’t pull the trick of using the modulation sequencer to control pitch, like you could on the Lemondrop and Fireball. In fact, there is no modulation sequencer, just two LFOs and two envelopes. And pitch isn’t a modulation destination. You can change the tuning of individual pads and create something melodic that way, but that’s it.

The sounds themselves are excellent, though. The collection of 120 preset kits tend toward the glitchy and electro side of things. Since there’s a sampler, in addition to the FM engine, however, you can get convincing real drum sounds too. Most of the included samples don’t lean into the acoustic realm, but you can easily load or record your own if you like. The one thing to note is that there’s no way to chop up samples on the Razzmatazz. So if you want to slice up a breakbeat, you need to do that before you import it as separate files. Same for loops. 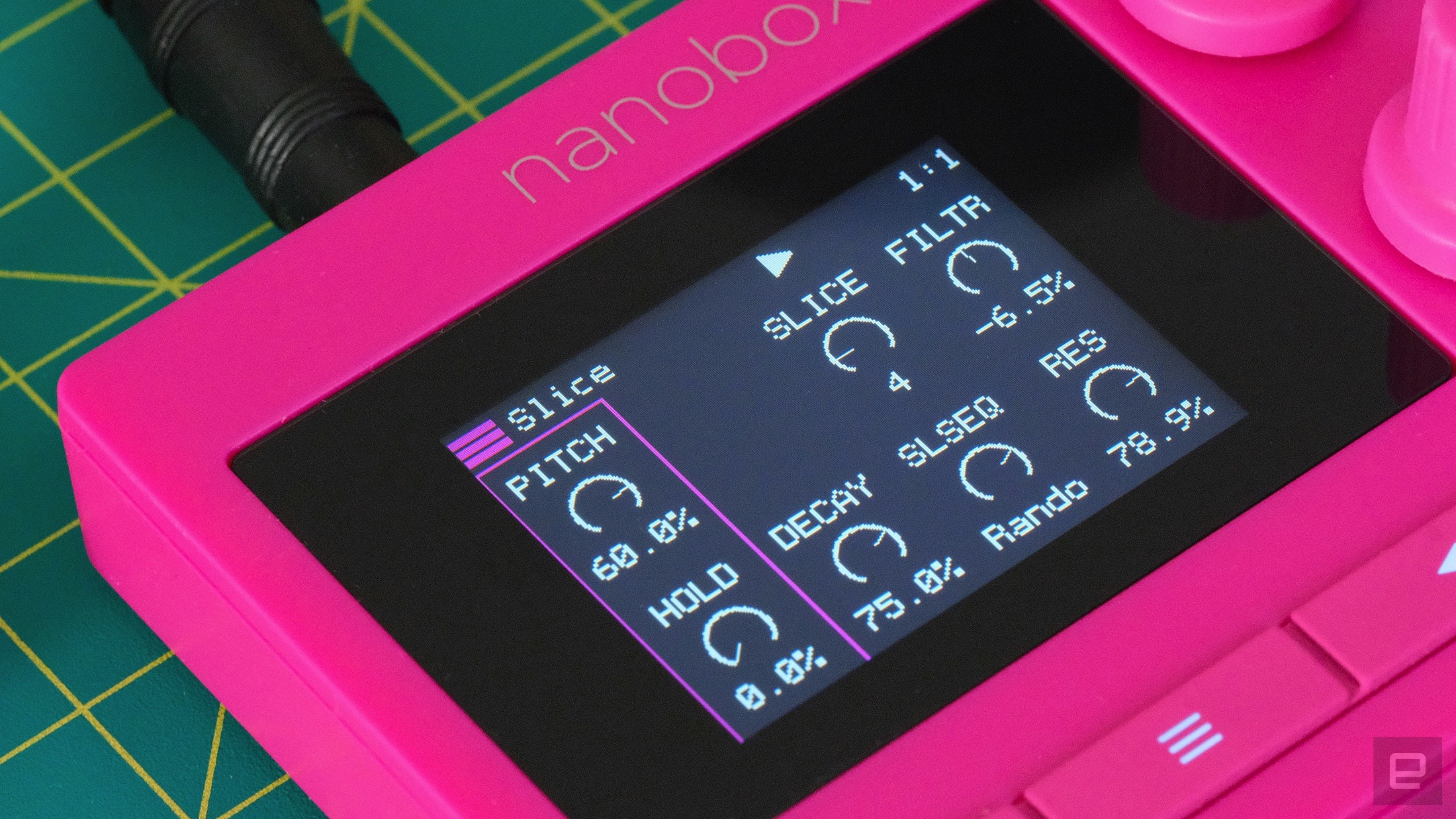 The top left-most pad has two special modes called Slicer and Clip. These allow you to get some of the benefits of chops and loops. But they’re a tad cumbersome and require some prep work. Slicer will playback bits and pieces of a sample, but you have to mark cue points using the company’s Blackbox or in software like Reaper or OcenAudio. Of course this is different from chopping up and rearranging a sample. Instead Slicer works its way through a full sample in a particular direction or jumps around randomly.

Clip mode is primarily for loops, but again, you need to trim up the sample beforehand. Make sure it’s a full number of bars and roughly within 20 BPM of the playback tempo. If you try to stretch it too far, or leave a bunch of dead air before or after, it may not deliver great results.

You also can’t just connect the drum machine to your computer via usb and transfer files. The USB-C port here is for power only. You’ll actually have to take the microSD card out and put it in a reader to move samples around. Frankly, that’s a little cumbersome for my tastes, and I usually preferred to just record directly to the Razzmatazz. You can’t trim or alter samples once they’ve been captured, but the threshold option at least means you won’t have a ton of silence at the start of a recording.

Unsurprisingly, the actual act of using the Razzmatazz isn’t all that different from using a Lemondrop or Fireball. You still get a UI organized by sections, and within each section are layers and then each layer has pages. It’s a little more work to find your way around the Razzmatazz because it has eight individual voices with their own set of parameters. And sound design is a bit more complicated because the synth engine is FM based, and FM is notoriously difficult to wrap your head around.

But credit to 1010music for trying to streamline things as much as possible. The first layer beneath each pad is a collection of eight macro controls. And from here you can also change the “model” of the pad to quickly dial in generic sounds for kicks, snares, toms, etcetera. These two things alone let you cover a decent amount of the basics. But you’ll definitely want to explore beyond there, to all the pages you can access from the pad dashboard. Here’s where you’ll find all your oscillator options, FX sends and modulation controls. 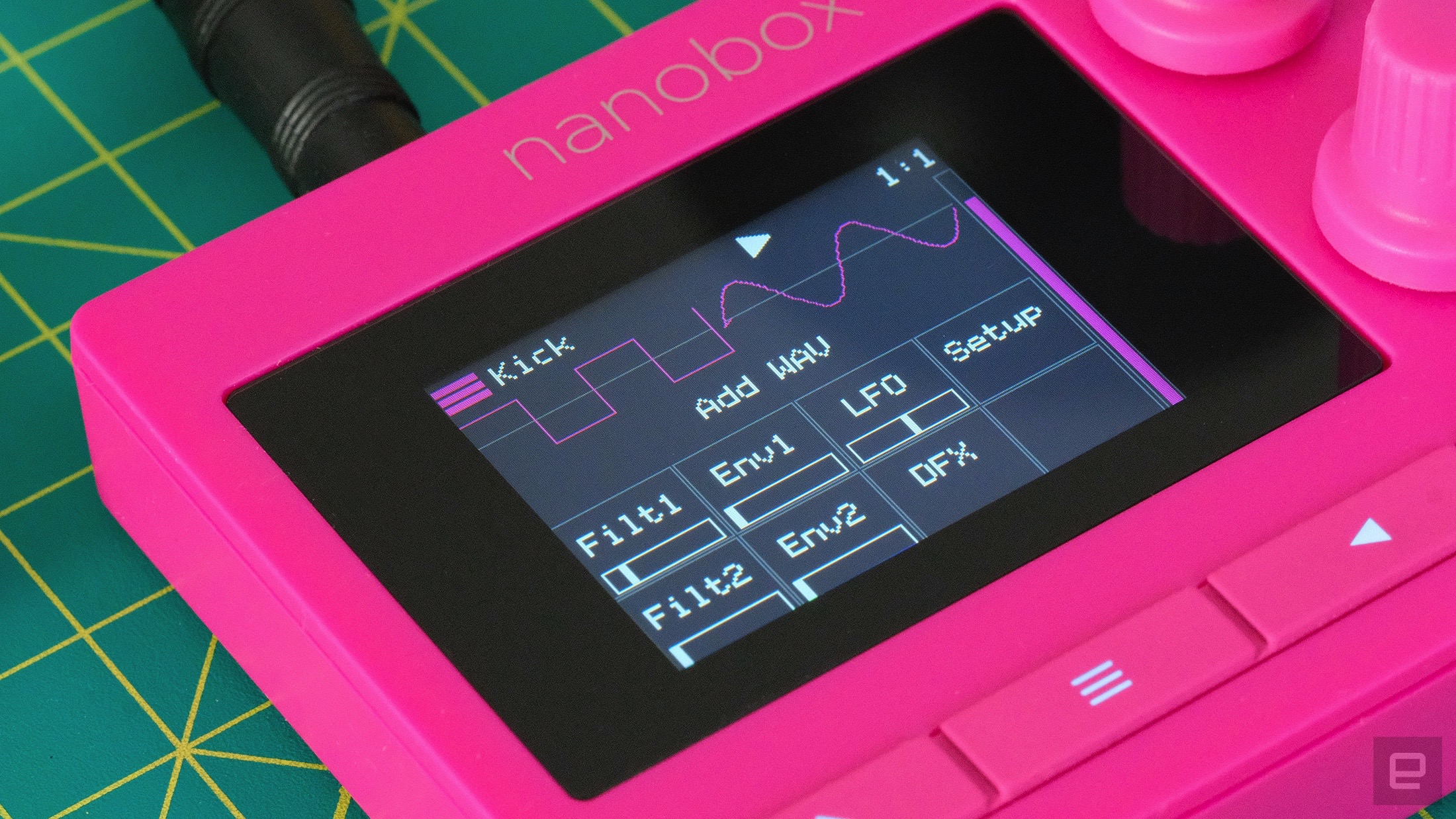 If you hold down the home button, though, you’re brought to the “Teleporter.” Here you can jump to almost any page or submenu you want with just a single tap. It’s a much faster way to navigate the UI. In general the Razzmatazz makes better use of the touchscreen than its predecessors. That’s partially just down to the kinds of machines they are. Tapping in sequences and playing one of eight reasonably sized touch pads just makes a lot more sense, than trying to play melodies on a grid of notes sized for a toddler.

Unfortunately, the X/Y macro mode from the Lemondrop and Fireball is gone. Your performance options are largely limited to playing the pads live, switching sequences and muting individual pads. Using the touchpad to control pattern-wide parameters, or engage a stutter effect would give it a lot more flexibility as a performance tool.

On the plus side, the sequencer is extremely straightforward. It lacks ratchets, microtiming, probability and almost any other modern amenity. But its simple TR-style makes it easy to quickly toss together patterns or alter them on the fly. The main sequencer page lets you swap between patterns, and the changes are tempo synced so you won’t awkwardly cut one off before its natural conclusion. 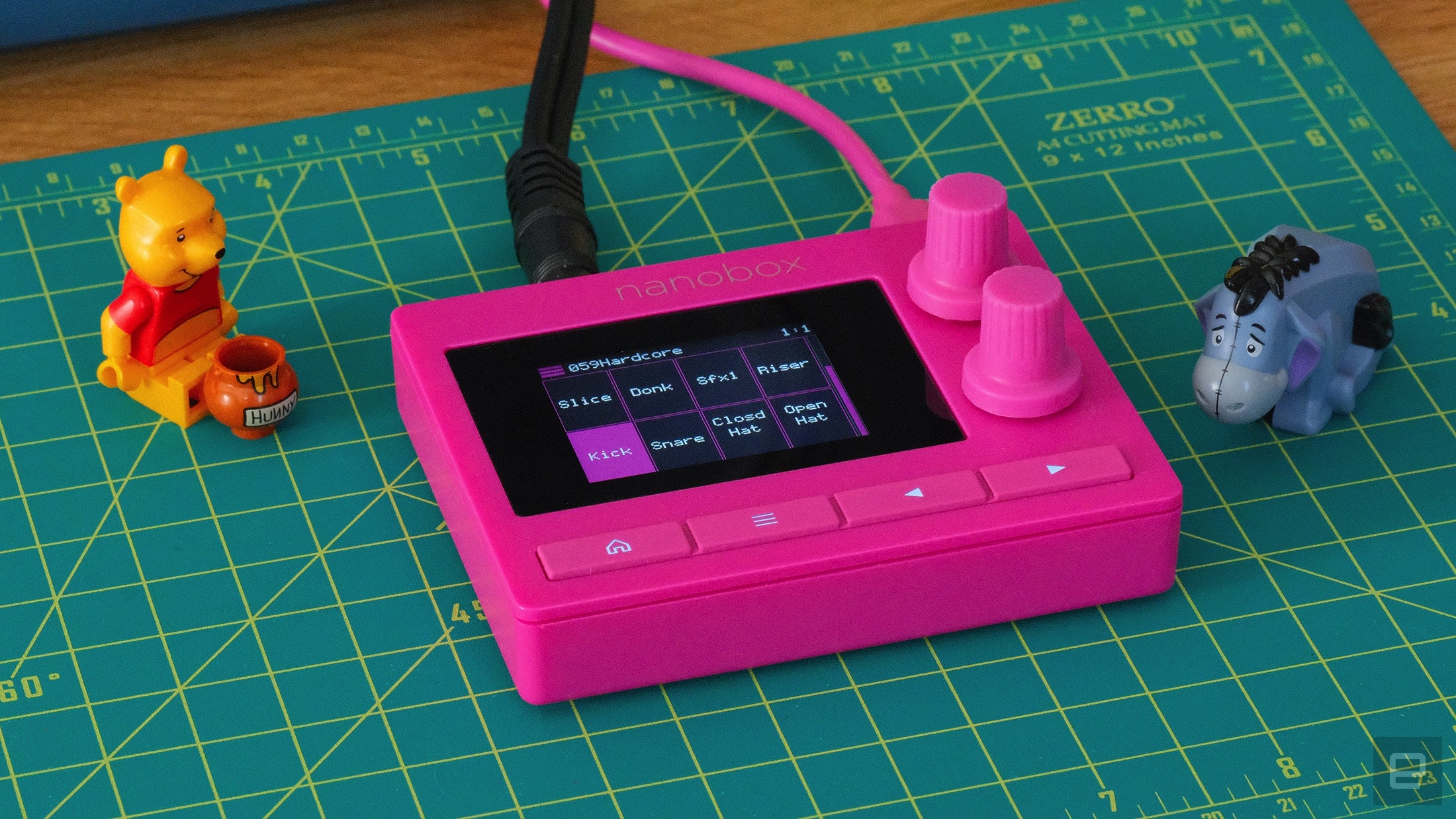 The Razzmatazz is a welcome addition to the 1010music Nanobox family. Similar to its stablemates, the Fireball and Lemondrop, there is no direct competitor due to the depth of the sound engine and stunningly compact form factor. I’m unaware of any drum machine in the sub-$500 space that combines FM synthesis and sampling in the same way. And as far as I can tell, only Teenage Engineering’s Pocket Operators come close to being as pocketable. Of course, those offer less sound design options. But combine a Razzmatazz, Lemondrop and Fireball with a small mixer like the Bastl Dude or (if you like setting fire to money) the TE TX-6, and you’ve got yourself a portable music making rig that could fit in a couple of coat pockets.

There are a few features and changes, though, that seem like no-brainers and would greatly improve the usability of the Razzmatazz. Some form of basic sample editing, for instance, expanded sequencing features like ratchets, and performance-focused master effects would really elevate the instrument. Right now the Razzmatazz is a very good drum synth, but it’s potentially only a firmware update away from being a great one.