The Backbone One made cloud gaming on the iPhone feel natural

Whether it’s Xbox Cloud gaming, Stadia, PlayStation Remote Play or just a very severe addiction to Apple Arcade, gamepads are a better way to play many games on your smartphone of choice. Normally that means using some kind of smartphone clip to attach your phone to your existing controller, propping up your phone and hoping for the best, or choosing from an increasing selection of controllers that snap directly onto your phone. Instead of demanding compatible phone cases or separate pieces that connect either side of the phone, the $100 Backbone One is a single-piece controller that extends to fit it.

Unlike the Razer Kishi, which we tested in detail here, the One is a single device with a telescopic backplate that fits around any iPhone. (With some help: the One isn’t compatible with the iPhone 13 Pro. Backbone has, however, started providing a soft rubberized adapter that slides into the controller, ensuring the latest, bigger iPhones fit snugly and securely.)

So why invest in another controller for your phone when most mainstream console gamepads you probably already own already do the job? There are a few reasons. Backbone One, with its direct Lightning connection, sidesteps the extra jeopardy that comes with Bluetooth-connected controllers, which introduce another latency bump in the road. The company has wisely included a charger pass-through (gaming can burn through your battery) so you can keep your phone plugged in as you play.

The device has a subtle matte black finish, with two collar buttons on each side, a four-button layout on the right side (X, Y, A, B), a slightly-too-spongy d-pad on the left and an analog stick on each side. The sticks feel a little looser than others I’ve used, but they’re accurate and comfortable.

Backbone struck a deal with Microsoft, offering a one-month trial of Xbox’s Game Pass Ultimate for new Backbone owners. It said so on the box, it says it in the app, and it’ll say it in an email if you register the controller. You will get the hint.

The button layout does lean more towards Xbox gamers, but my PlayStation muscle memory meant I didn’t have too many issues using the One to play my PS5 remotely – just the usual drawbacks of playing with a controller that isn’t a DualSense, with its unique tricks and features. Using the touchpad will mean reaching for a section of the iPhone screen, while you’re not going to get any haptic feedback from the triggers or controller itself.

There are a handful of buttons in addition to the stable gaming ones. The orange button launches Backbone’s own game portal (part of the BackBone iOS app), while others offer screen and video sharing shortcuts or what you’d expect when pressing start or menu on console controllers. 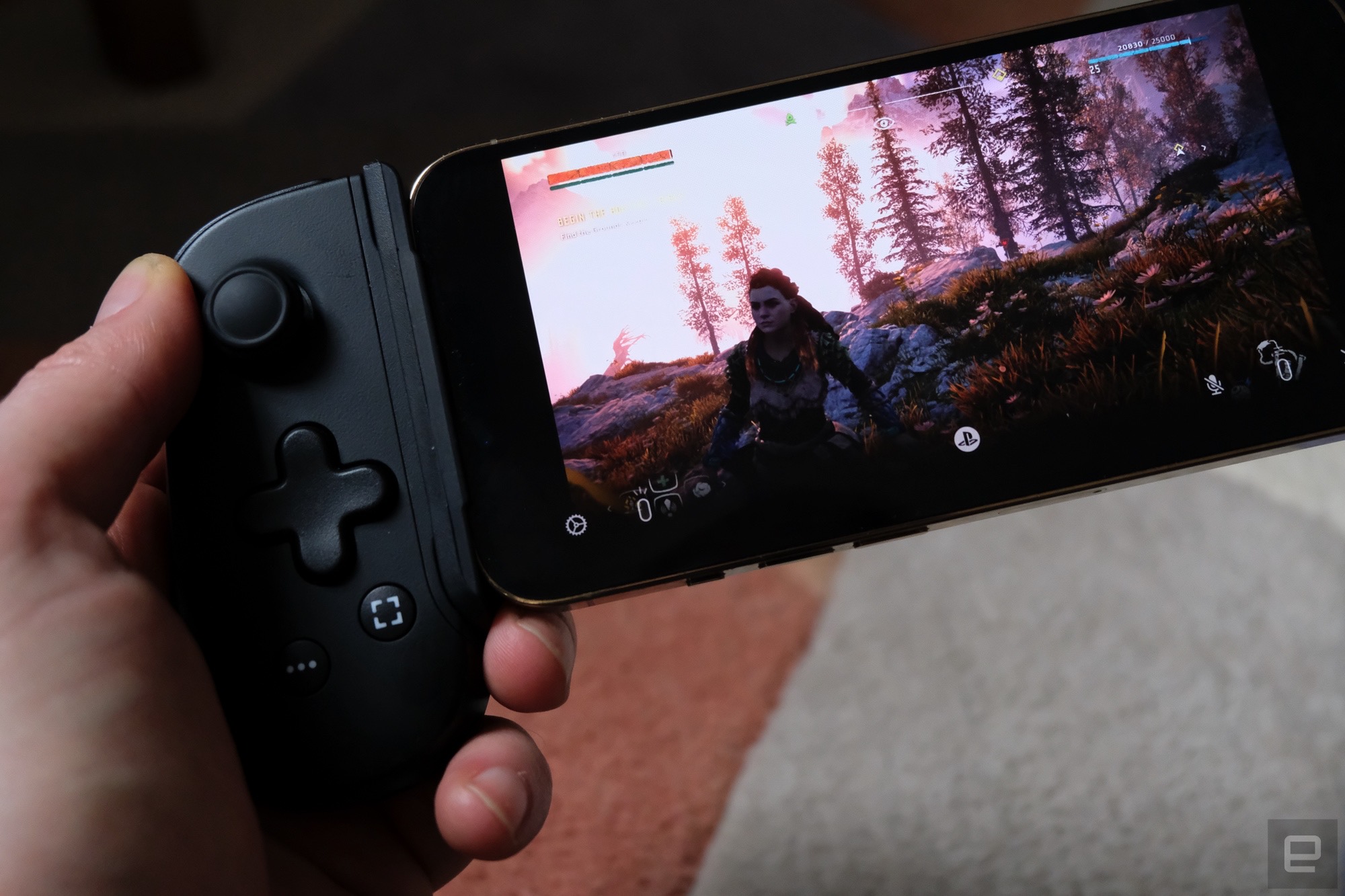 The controller’s namesake, the spring-loaded backplate, ensures that once your phone is in place, it all feels solid and unified. The controls aren’t going to pull away, nor is there a chance of your phone slipping out. The more I spent playing through Alan Wake, then Deathloop, as well as Apple Arcade titles like Fallen Knight and Fantasian, the more it started to blur into a handheld – one with a high-resolution OLED screen. Unfortunately, you will have to remove any cases to ensure it fits inside the controller chassis.

The companion app has a few useful tricks. It can capture, edit and upload gaming content, and it’s pretty intuitive. I don’t usually capture gameplay unless it’s for work, but I’ve already used Backbone’s implementation to send short clips to friends. The company has also announced a Backbone+ subscription service that integrates Twitch streaming and even enables cable connections for keyboards and more. (You’ll get a free year of the service when buying the controller.) There’s also the ability to join chat groups and lobbies, populated with other Backbone gamers, but it’s not particularly vibrant in comparison to Discord, Reddit or other existing gamer spaces.

The app also serves as a games library, of sorts, of all the games you can play with the Backbone One, across Xbox, Stadia, Apple Arcade and individual games in Apple’s App Store. Unfortunately, it’s literally all the compatible games, including unremarkable game clones, and Xbox and Stadia titles you might not even have a subscription for. It’s a shame the app couldn’t interface with which games I’d already installed – which would be impossible for PlayStation Remote Play, admittedly. Tapping the Backbone button during a game will log the title into the library for more convenient access next time, at least. There’s deeper functionality here, but your mileage may vary. It will show recommendations of popular titles, but it’s the incredibly familiar sights of Among Us, Genshin Impact and Minecraft.

The Backbone One is a capable iPhone gamepad, so much in fact that sometimes I actively choose to play Stadia and even remote-play PlayStation when I’m in another room. It is, however, an expensive one. $100 can buy a couple of PS5 controllers, or an entire box of third-party Bluetooth gamepads and smartphone clips.

But for that price, you get a slick experience that marries well with your iPhone. Over the holidays, when I visited my family, I was able to effortlessly (aside from reading the tiny text) play Deathloop while being hundreds of miles away from my console. Like several existing split gamer pads for smartphones, it’s like a tiny Switch. The app also tries to pool together all your iOS gaming experiences in a single place, which is a nice idea, even if Backbone doesn’t quite nail the execution.