When it comes to noise cancelling headphones, there are several effective options that will get the job done. It’s putting together great audio quality with powerful noise blocking abilities and other handy features that cause many companies to stumble. The likes of Bose and Sony have damn near perfected the craft while the rest of the pack attempts to usurp them. Yamaha is the latest to throw rocks at the throne by adding a collection of 3D sound options of its latest headphones with active noise cancellation (ANC). The YH-L700A has unique qualities, but $499.95 is a high price for Yamaha’s latest blend of design and features.

Yamaha created a unique aesthetic for the YH-L700A. Opting for square earcups over the typical oval shape. They’re immediately striking – for better or worse. But, the combination of leather, fabric, matte black plastic and silver accents create a refined look. The company also decided to attach the headband at the front of the earcups rather than at the center. This doesn’t make a massive difference in terms of comfort, but it does mean the headband sits further forward on the top of your head. Earcups swivel flat and fold in for easy storage, which makes the YH-L700A a decent option for travel.

There are no touch controls here,Yamaha chose to go with physical buttons instead. On the back edge of the right earcup are power and 3D Sound Field buttons, with the former doubling as the Bluetooth pairing control and the latter allowing you to cycle through presets. On the outside of the right earcup, a small leather-covered panel holds buttons for volume, track controls, play/pause and activating a voice assistant. Those last two options are in the middle (single and double press, respectively) while the two outside arrow buttons adjust volume with a single press or skip tracks with a press and hold. Unfortunately these are difficult to find; they’re not embossed deep enough to feel them easily. Over on the left, there’s a single button on the back edge for noise cancelling mode. A single press cycles between ANC, ambient sound and off.

The main attraction on the YH-L700A is Yamaha’s 3D Sound Field feature, complete with head tracking. Basically, the company has developed a collection of seven audio presets for music and movies or shows: cinema, drama, music video, concert hall, outdoor live, audio room and background music. Each one “transforms stereo sound into three-dimensional listening,” according to Yamaha, adjusting the parameters for each virtual environment in an effort to make things sound more immersive. Another aspect of this setup is dynamic head tracking, which gives the illusion of the audio coming from a stationary point in space when you move. It’s a bit weird for music, in my opinion, but it does add something to more cinematic viewing sessions.

It’s obvious that 3D Sound Field significantly tweaks the audio on every preset. However, all of the filters are very heavy handed, drastically changing the EQ and other parameters to the point that none of them work well across genres. Outdoor live, for example, accurately creates the feeling of being at a festival, with the heavy bass and subdued vocals you’d experience in real life. It’s okay for things like metal and rock, but for softer more acoustic styles it’s not great. If you listen to a wide range of music you’ll need to change presets when you venture to a new genre. Oddly enough, the cinema preset is the best all-around setting for tunes. Almost all of the music presets are loaded with reverb, which works for something like the concert hall preset, but it becomes exhausting elsewhere. All of the options recreate their stated venue, it’s just that none of them are really pleasant to listen to for an entire album’s worth of tunes.

When it comes to movies and television, the cinema and drama options are quite nice. There’s no content that highlights this prowess better than Netflix’s Formula 1: Drive to Survive. With a mix of spoken interviews, auto racing and dramatic overtures, there’s a lot for headphones and speakers to handle. The YH-L700A does well with the dimensional sound that’s typically best served by a Dolby Atmos setup in your living room. Everything sounds spacious, and the directional roar of the cars comes through nicely. 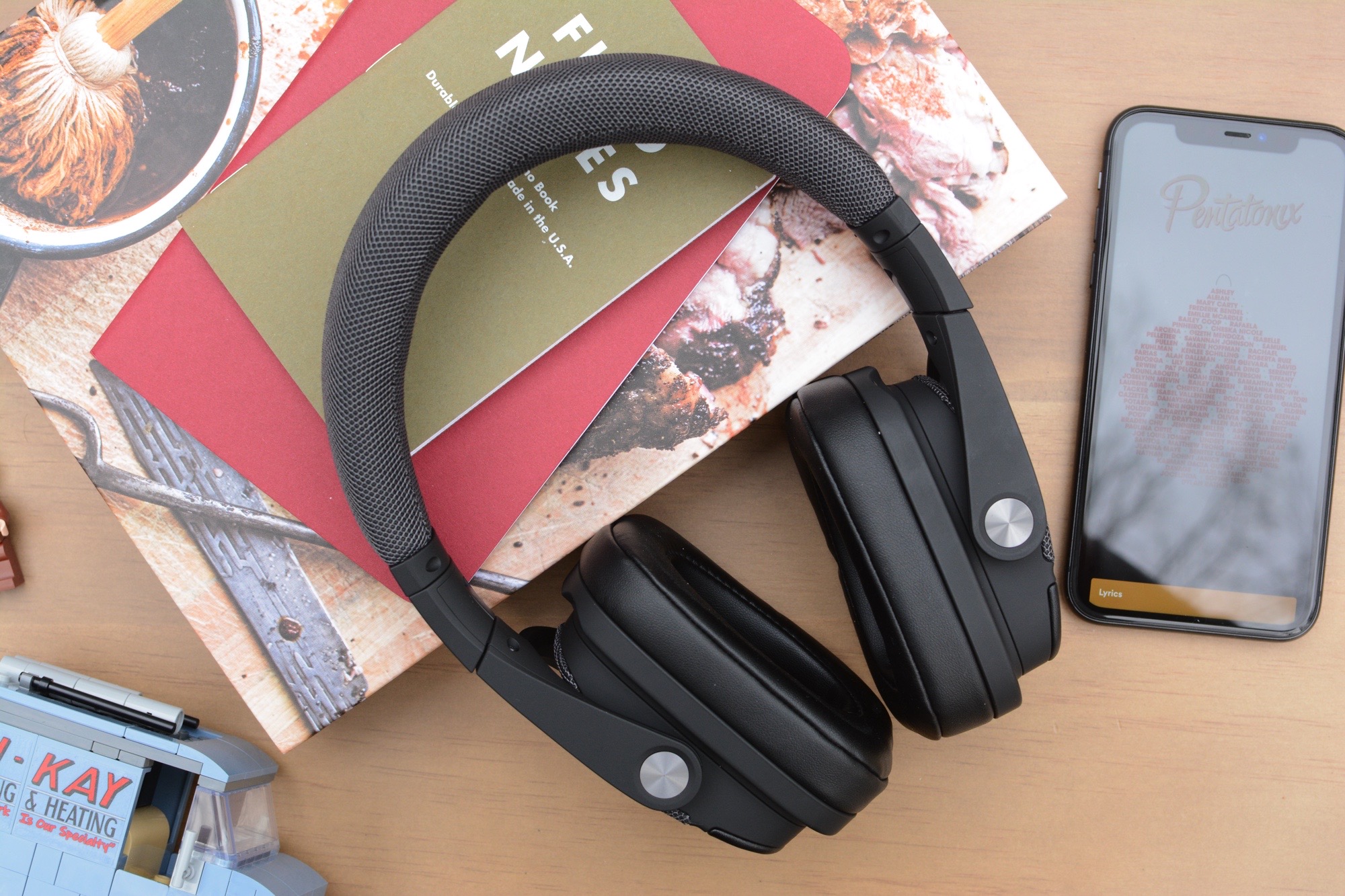 Without 3D Sound Field, the YH-L700A is an average sounding set of noise cancelling headphones. There’s good clarity and detail, but the mid-range can be overbearing when you’re listening to a full band. There’s decent, punchy bass but a shot of treble would go a long way here to round out the sound and cut through the chaos of songs like Underoath’s “Damn Excuses.” At times, the lack of highs creates an unpleasant muddy mess. Even with more acoustic genres like bluegrass, upright bass dominates with the other strings taking a backseat. That’s the case throughout much of Sturgill Simpson’s The Ballad of Dood & Juanita. It’s obvious Yamaha was intent on making its 3D audio feature sound good, it’s too bad the “regular” listening experience is mediocre at best.

The YH-L700A packs active noise cancellation, complete with an ambient sound mode that allows you to tune into your surroundings as needed. Like Apple and others, Yamaha outfitted its ANC setup with tech that can adjust the audio to changes in wear. The so-called Listening Optimizer takes measurements every 20 seconds to pick up any variances in seal and air leakage. The headphones can then adjust the sound to account for any issues. While I don’t have any way to measure how effective this is, I can tell you that overall, the ANC gets the job done. It’s not as powerful as the likes of Bose or Sony, but most of the time it’s good enough.

Lastly, there’s a Listening Care feature that attempts to maintain decent sound quality even when you listen at lower volumes. Typically, and to the detriment of our collective hearing health, headphones sound the best at medium high to high volumes. With the YHL700A, Yamaha says Listening Care analyzes sound to keep a full range at low volume. It accounts for changes in background noise during the process, to offer the best possible audio no matter how loud. And while it’s not as consistent as the company would have you believe, rock tunes maintain a decent frequency range well below 50 percent volume. You do lose some detail, as expected, but it’s still perfectly listenable at those levels.

The marquee features can be enabled or disabled from Yamaha’s headphones app. There are options for 3D Sound Field, head tracking, Listening Care, Listening Optimizer and noise cancellation. You can also select your preferred 3D preset from your phone as well as adjust (or disable) the auto power-off timer. The software displays your battery percentage too, so you’re not left wondering what the “battery level high” voice prompt means when you power up the headphones.

Battery life is a major sticking point with these headphones. During my initial tests, I managed just ten and half hours with both ANC and 3D sound enabled and head tracking off. That’s 30 minutes shy of the company’s 11-hour projection. Sure, that’s a lot of tech at work simultaneously, but most flagship noise-cancelling headphones are pushing 30 or more hours of use on a charge. Yamaha says this is possible if you disable the Sound Field tech, extending the expected battery life to 34 hours. The range with the YH-L700A at full strength should be at least 15 hours to justify the asking price. The company released a firmware update ostensibly to improve battery life during the course of my review, but the results didn’t change with ANC and 3D sound both active.

In terms of the movie- and 3D-focused competition, a few options come to mind. Apple’s AirPods Max feature dynamic head tracking and support spatial audio through Dolby Atmos and Atmos Music. It doesn’t have a selection of presets to help you fine-tune things ready at the press of a button, but there is an adaptive EQ that maintains sound quality as conditions and external noises change. AirPods Max also offers the most natural sounding transparency mode out of any headphones I’ve tested. However, they’re still $479, although we’ve seen them as low as $429 recently.

Sony’s WH-1000XM4 is another excellent alternative. The company’s flagship model is packed with handy features like pausing when you speak, quick attention mode and the ability to automatically adjust noise cancelling settings based on activity or location. The 1000XM4 equally impresses in the sound and ANC departments, including support for 360 Reality Audio via supported streaming services, making them our top overall choice for headphones right now. They don’t pack in dynamic head tracking, but they will save you significant money at the current going rate of $248 (full price: $350).

Yamaha has crafted an interesting proposition with its YH-L700A headphones. The company attempted to equally cater to both cinephiles and music nerds with features that work for both movies and television alongside options for casual listening. Battery life with the most attractive tools enabled is disappointing for a set of $500 headphones and the presets would benefit from some restraint. A fully customizable EQ and a slight bump in the battery department would go a long way to justifying the high price here, but for now, Yamaha has a solid set of headphones in need of some fine tuning.